Last week Canada’s Federal Government, in its first majority budget, announced that it would cease funding Katimavik. I’m sad for all the future young people who will not be able to participate in this great, 35-year-old program—an invaluable volunteer-leadership initiative that enables Canadians between the ages of 18 and 21 to get hands-on work experience while traveling the country.

I did Katimavik between the winter and summer of 2004. Over seven months, I lived in Tweed, Ontario, St. Stephens, New Brunsick and Lorette, Manitoba. I volunteered at an elderly care facility, a charity second hand store, in a primary school and for a municipality. I learned, among other things, how to bake bread, tend a lawn, grow vegetables and organize a charity fashion show. I even published my first piece of paid writing. It was a short article for a Winnipeg magazine called Swerve (now OutWords), and was about coming out of the closet and marching in my first Pride parade, two of my biggest Katimavik firsts (next to my first piercing—my tongue!). My Katima-group, which consisted of 11 young people from across Canada, had three gay guys and two bisexuals. I couldn’t have come out in any better, more supportive circumstances. I (almost) had my first real sexual encounter too (if drunkenly molesting a housemate counts—sorry Cody).

END_OF_DOCUMENT_TOKEN_TO_BE_REPLACED

On Saturday, after I spent the morning at Fallingwater, I went to the Andy Warhol Museum in Pittsburgh. Here are my thoughts on the experience:

To a certain extent, I feel like I’ve grown up in a time heavily influenced by Andy Warhol. My world view had been undeniably filtered by the celebrity-drenched culture that he explored, documented and, dare I say, championed. I’ve lived my fifteen minutes of fame on Facebook, YouTube, Twitter and now this blog. When I visit almost any major art gallery in a foreign city (or, for that matter, in my hometown of Toronto), I inevitably find one or more of Warhol’s most iconic silk screens — the soup cans, the Marilyn Monroes, the Liz Taylors, the Maos, the Evlises, the Jackie Kennedys. But even if I don’t see one of his pieces directly, I am bound to see something by one of the legions of artists that he either directly mentored or inspired (Basquiat, Keith Haring, Jeff Koons, Damien Hirst and so on).

END_OF_DOCUMENT_TOKEN_TO_BE_REPLACED

On Saturday I made an architectural pilgrimage to see Frank Lloyd Wright’s Fallingwater in Mill Run, Pennsylvania. The drive down from Pittsburgh, where my boyfriend and I spent the weekend, rolled though tree-covered hills and small, quaint farming communities. It was so restful and pleasant that I almost forgot where we were headed and why.

The tour of the house is only and hour long, but it’s undeniably worth it. The place is like a mid-century modern fantasy land, with bold horizontal lines in rich black walnut, rough-cut stone, ochre-coloured concrete, and dark red window mullions. There is a deep, comforting warmth to the rooms (this isn’t a cold, hulking, Corbusier-style modernism) and at times an almost Victorian feel. The hallways are tight and dark, and there’s an upstairs/downstairs divide between the servants quarters and the rest of the place that feels really old fashioned (the house was designed in the 1930s, which is easy to forget considering that it feels much more contemporary). There’s also a sense of playfulness and levity—the built-in sofas have a cream-coloured upholstery, and are cheerfully accented with square pillows in ketchup-y red and mustard yellow. Most remarkably, walking from room to room, there is just such a clear and palpable feeling of enthusiasm—it’s clear how much Frank Lloyd Wright enjoyed crafting the house. It almost comes across as spontaneous, like jazz, or as though the design just popped out of his head like a witty turn of phrase.

I hope the clients—the Kauffman family—enjoyed spending time in its cascading planes and fluid walls. I imagine I would have loved lounging in either of the pools, or deciding which of the many terraces to sit out on to read the latest New Yorker.

I have to admit that booking a trip to Beijing was somewhat compulsive. I’ve just started a new job and the airfare is quite expensive. But a friend of mine is going to be living there for the summer, and casually mentioned over lunch a few weeks ago that if I wanted to come for a visit, I could stay with her for free. Who could say no to a free room? Although I know very little about Beijing, I’m really excited to be going, and I’ve started putting together my to-do list. Of course, The Great Wall of China, Beihai Park and the Forbidden City are high priorities, as is a walk through one of the surviving hutongs and trips to the 2008 Olympic venues (The Bird’s Nest and the Water Cube). Here’s a few of the other things I’m thinking:

When I was finishing architecture school, I basically stole the design for my final year project from Japanese master Kengo Kuma. But I’ve never seen one of his projects in person (I’ve just been a fan from books and magazines). I’m not sure if his Sanlitun Soho is one of his best works, but I’m curious if his spaces are as graceful in person as they are in architecture magazines.

END_OF_DOCUMENT_TOKEN_TO_BE_REPLACED 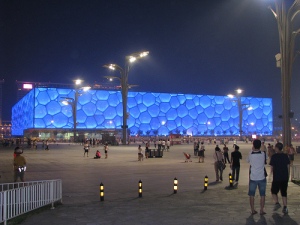