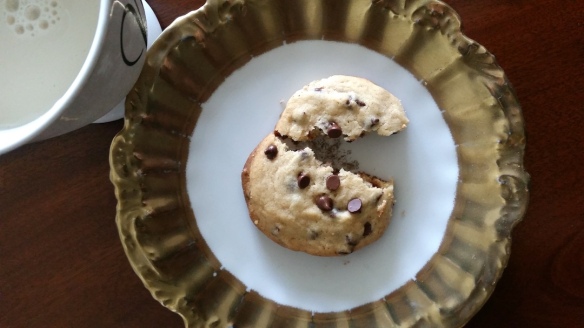 Zac Posen pays extreme attention to detail. I know this to be a fact. Not from the fashion designs which brought him fame. The 38-year old New Yorker hand-crafts clothing for beautiful women — Uma Thurman, Claire Danes — to grab best-dressed headlines at the Met Gala and the Oscars. Whereas I’m a not terribly fashionable man.

Instead, I gleaned his commitment to precision when I tried to follow the chocolate chip cookies from his debut recipe book, Cooking with Zac. The first indication was that I had to brown the butter in a pan until it looked like “deep mahogany with a hazelnut scent,” he writes — a necessary extra step because “with so many cookies in the world, it’s the fine touches that count.” The second indication was that I had to hand-press the chips into the top of the dough to achieve “a polished and professional look.” Clearly, this is not a recipe for a lazy baker.

Confession: I made the cookies as a test. I had recently met Zac at a food and wine festival in Newport, Rhode Island. The event was held at Marble House, a Gilded Age mansion decked in enough gold leaf to make Donald Trump blush (it was built after some of the Vanderbilt’s went to Versailles and said: “I’ll have one of those, thanks”). And I was surprised to see that Posen was headlining the event, not only promoting the cookbook but a new fridge door produced by luxury appliance brand Monogram (fabricated from mirror-polished, charcoal-coloured steel and etched with lines that look like draped fabric, the door is interior design’s equivalent to couture. It’s not for sale at any retail stores. Instead, its purpose is to inspire decorator’s to come up with their own creative, custom paneling).

It all made me wonder: does someone who works in an industry that often seems antithetical to food actually know anything about cuisine? Not to suggest that skinny people like Posen, who was looking trim in a hand-tailored Brooks Brothers suit, don’t know how to cook. But there was a cynical part of me that thought: he’s just left Project Runway, and fashion can be intensely fickle (as outlined in the 2017 doc about him, House of Z, which showed how he was a fashion do one minute, a fashion don’t the next), so maybe he’s trying to capitalize on the celebrity chef trend as a career plan b?

But later in the day, when I got a few minutes to chat with him — after he signed about a trillion autographs and ran a Kung Pao shrimp cooking demo — the results of which were a joyful explosion of ginger and garlic — he quickly clarified that fashion people not only eat, but eat — gasp — carbs. “There are many super models that I know — I mean, Naomi, Heidi — who can eat pizza,” he says. “But they also work out, so it’s all moderation and balance.”

He also clarified that his kitchen conquests are less about pivoting, more about speaking to a broader audience. In part, he’s taking after people like Martha Stewart, who transcended her original, homemaking genre to become an fully-fledged lifestyle brand. “I’ve watched her since I was a little kid,” he says. “I got her first book. I’m inspired by how she’s built her empire.”

Pivot or otherwise, trying to move into a new space can be risky, and often falls flat (does anyone remember Tyra Banks’ music career?). But what might set Posen up for tremendous success in his new ventures is that “they are authentic to him,” says Natasha Koifman, a Toronto and New York-based branding, communications expert and Zac Posen devotee (“I love his clothes,” she says. “They fit perfectly”). According to Koifman, the pitfalls of branching out “usually involve doing brand deals for the sake of brand deals (i.e. money). But Zac genuinely loves cooking. It’s all over his Instagram.”

Beyond social media, one of Posen’s personal friends, Canadian philanthropist Suzanne Rogers, vouches for the legitimate interest. “Zac’s dynamic flair isn’t only reflected in his remarkable designs but also in his culinary skills,” she says. “Whether in his studio or his kitchen, it is wonderful fun watching him express his tremendous creativity.”

To Posen, who will be in Toronto showcasing his work with Monogram for the Interior Design Show, from January 17 and January 20, the common denominator between food and fashion is that he does both largely by hand (and, in fact, that’s why he agreed to work with Monogram — they hand-finish their appliances). “Being hands on is so important,” says Posen. “I believe that what you put into a product emotionally actually extends into the final product, and into the use by the consumer. They feel it when they put on the clothing, or, if it’s an oven or a fridge, it comes through to what they cook. Not to sound like Shinto, or something. Not that the products always have full souls or character. But I honestly believe it makes a difference.”

In a world built for speed, that commitment to detail and craft might mean Posen’s expansion into lifestyle takes a long, long-time (his cookbook was close to three years in the making). But if his cookies are any indication, it will be worth the wait. Browning the butter and placing each chocolate chip took forever. But eating the nutty, sweet goodness was such an ineffable pleasure, I’ve made the recipe several times since.

This piece originally appeared in the Globe and Mail on Friday January 10, 2019.