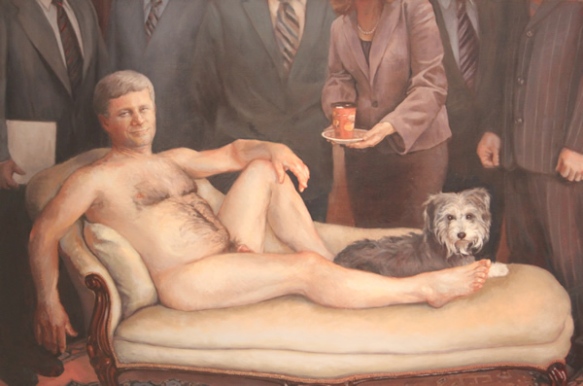 Artist Margaret Sutherland claims she was making a satirical political statement with her now-famous painting, Emperor Haute Couture, which depicts Canadian Prime Minister Stephen Harper completely naked. I have to admit that I’m transfixed by the piece, but I’m not sure what statement it’s making. I can see how the work echoes Manet’s Olympia, which would suggest that Harper is a prostitute. But is that fair? He seems more like an aggressive pimp to me, whoring out Canada’s natural resources and smacking around his cabinet ministers. In my opinion, the painting is best taken at face value: Harper is an exhibitionist with a weight problem, a small penis and a habit for Tim Hortons. None of that may be true, but it’s funny none the less.

Emperor Haute Couture is currently hanging in a library in Kingston, Ontario, and is for sale for $5,000. Who would buy it? I’m guessing a gay guy with a daddy issues and a taste for irony.

While contemplating reforms to Canada’s Employment Insurance plan, finance minister Jim Flaherty — who makes $235,000 a year — remarked this week that “There is no bad job. The only bad job is not having a job.”

I beg to differ. Here’s three positions I would say no to:

1. Orange Juice Connoisseur: Sorry Bev Oda, but if I wanted to have millions of people mock, deride and resent me for my extravagance, I would sooner be a Kardashian or the star of a Real Housewives franchise (then at least I would have honestly earned the privilege).