When Lena Dunham’s Girls first premiered, I thought Adam Sackler was straight up repulsive. Eight episodes in, I’m on the fence. On one hand, he’s a foul-mouthed perve with no job, no prospects and no shirt. But there’s an endearing quality to someone as unfiltered, boyish and impulsive as Adam. He basically says everything that crosses his mind and does whatever he wants to. So, like Jessa, I’m not sure if he’s “a great thinker, or just a total fucking idiot.” Below, what makes me want to vomit, and what I find sweet.

Two words: Golden showers. No, three words (because there are some people who would actually find that hot): Unsolicited golden showers. The only thing more disturbing is that Hannah didn’t break up with him instantly. Or call the cops or the fire department or Amnesty International. Nasty.

He reeks of semen and BO. Yes, he’s a TV character, but the stench seeps through the screen.

He asks questions like “would you have fucked the four-year-old me?” And he uses phrases like “cunt-satchel,” and words like “skank” and “pussy.” Basically, much of the crap that he blurts out is sordid, sexist and ear-bleedingly offensive. 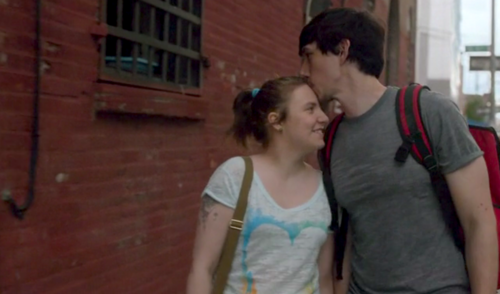 He’s a recovering alcoholic. Admittedly, this isn’t the most obvious reason to find a guy hot — but it shows that he can take responsibility and commit to self-improvement. It also means Hannah will never have to utter the much abused girlfriend phrase: “sorry, he was drunk last night.”

He works out. Sure, his face looks like it a got left behind on the gorilla-to-human evolutionary chain, but his body isn’t bad. It’s not so good that he needs to parade around topless all the time, but that’s another issue.

He writes plays. True, he doesn’t have a job, kids (that we know of) or any other perceivable accomplishments — but at least he does something, right? And that monologue about jerking off in the sixth grade was kind of entertaining (in a low-budget, fringe festival sort of way).

He has a heart. It might be the size of a raisin and the colour of coal, but he can actually be sweet. Like when he bought Hannah ice cream. Or when he empathized with Marnie about her relationship woes (instead of telling her what the rest of us were thinking: you look like a bag and Charlie is well rid of you).

Maybe with the right meds, he could almost be boyfriend material. The kind of boyfriend that you quickly outgrow and then go to therapy to get over, but an interesting experience none the less.

1 thought on “Hot or Not: Adam Sackler on HBO’s Girls”