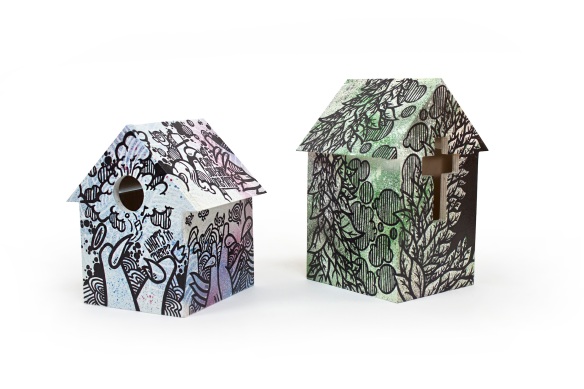 Quebec City is iconic for its old world architecture and cobble-stoned, urban streets. But that’s just the historic core. Much of the provincial capital is made up of diffuse, car-centric suburbs. To some, the extreme dichotomy underscores the eyesore that is modern city planning. To design group Six Point Un, the contrast between the metropolitan and the mundane is endlessly inspiring. Formed two-and-a-half years ago by Quebec City natives Claudia Després and Jérémy Couture, the studio has turned skate boards into swing sets and picket fences into coat racks. The latest product, a series of birdhouses designed in collaboration with graphic artists Matel and Avive, is a particularly pointed mash-up of the seemingly different worlds: generic, pitched roof houses (or churches, as it were) covered in the type of wild, energetic graffiti one would only expect to find in the middle of a city’s downtown. $150 each.  Through sixpointun.ca.

This piece originally appeared in the Globe and Mail on Thursday, April 25, 2013.