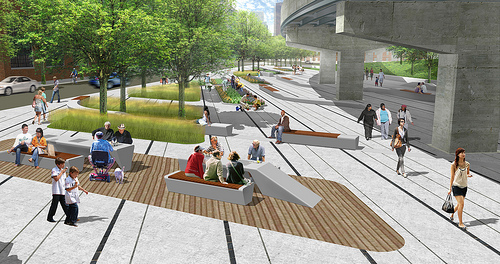 Toronto has an intensely divided love-hate relationship with the Gardiner Expressway, one of its major thoroughfares. Some people want to tear it down, others think it should be widened. Asking people what they think of the road is often an easy way to find out where they fall politically—lefties think its a blight, conservatives think we need more like it.

I can remember in 2008, then-mayor David Miller pledged to remove the eastern portion, between Jarvis Street and the Don Valley Parkway. It was, in the end, just a fantasy, and since the city’s politics have now moved back to the right with Mayor Rob Ford, the Gardiner is definitely not going anywhere. There have, however, been some interesting changes lately. No, we aren’t putting a strange, garden-bonnet over the road (as one local architecture office, Quadrangle, suggested we do a couple of years ago). Instead, a new park is nearing completion under the eastern-most portion of the road. Aptly called Underpass Park, the space will have a skate park, basket ball nets, and a playground. It won’t officially open until the summer, but the Toronto Star‘s Christopher Hume recently released a video preview. Can’t wait to check it out soon for myself! 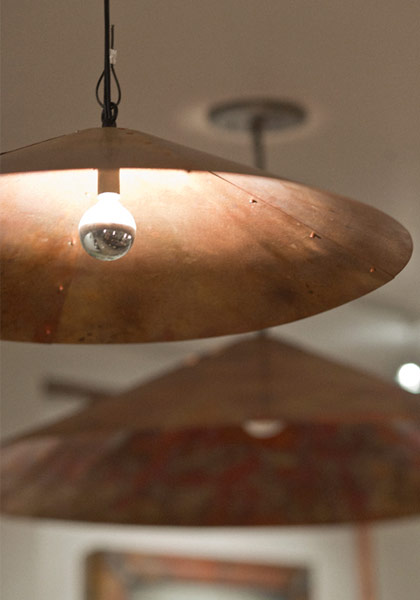 Photo by Riley Stewart, via torontolife.com's The Dish blog

Similar to the many other ultra-buzzy, independent restaurants that have opened in Toronto over the past couple of years, Yours Truly (229 Ossington Ave.) is a closet-small room run by a 28-year-old chef and a wait staff that was all born in the ’90s. And the decor is full of salvage and not terribly practical. To wit, when I went a few weeks ago, I had to lay my jacket on the floor behind the stool I was sitting on because there was no coat rack. I was, however, delighted by the different-sized copper lampshades that dot the ceiling. The shades have a simple but interesting shape and, of course, being copper, will develop an interesting patina overtime (because the food was so good—so good! Parsnip mousse = yummy—I’m sure I’ll be back to see the change). The restaurant was designed by Toronto’s Stroudfoot, which has done other quirky-beautiful restaurants including Origin and Colborne Lane.